Skip to content
For whom are these knives sharpened? To what end is the intention of these venomous words targeted? When did we get so carried away that it seemed we never learnt from history…?
Endless questions, deep thoughts, but sincere intentions… Yet we must speak the truth in love!
Haven’t you notice, that trends, patterns, events, seem to repeat, the devil never had newer or better tricks. Its the same strategy from the fall in the garden till now. The same tactics at the tree of knowledge … Ehmmm, JESUS CHRIST revealed not any other man! We don’t need a sodden lamb either,… Nothing else matters if its allegiance is not to Jesus and the corporate body properly discerned.
Yes! “…till we all come to the unity of the faith” does that mean anything at all?
Lately, there’s been concerns raised and burdens for the corporate body of Christ, seeing some unhealthy trends that tend to divide us rather than gather us. Do we remember that while the church in medieval times were busy arguing over doctrines, the dark ages began? Rather than engage a dying world with a saving Christ, they were at each others jugular, creating camps around venerated doctrines. We need all our gladiators at the battle remember? Unless we do not properly discern the body. We ain’t at war with ourselves!  Nehemiah 4:14 says something: 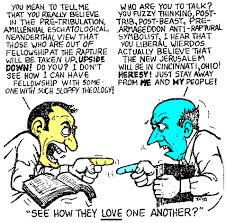 n shake a stick at. Issues like penal substitution, Christus Victor, universalism, inclusion, Eschatology, Law and Grace yada yada yada. The endless list goes on and on. Don’t get me wrong issues are important in their place. But when they become issues of blood and they divide us, then the life begins to flow out of us.
The church today is bleeding (if caution is not taken) with issues and we have spent all we had on preachers I mean physicians like the woman with the issue of blood, and we are not yet, we may get worse if we remain divided. The side effects from our religious prescriptions are as bad as the disease. When Jesus healed the woman with the issue of blood he was actually on his way to the house of Jairus to heal his little girl. He was trying to get to the next generation and he said concerning her she is not dead she is asleep. Jesus is always reaching to get to Generation NEXT (the next generation) to wake them up but before he does, he has to settle some of these issues of blood. The focus has to shift off of the issues because the only real issue is Jesus. If you touch him you will be made whole. We need a real encounter with touching Jesus. 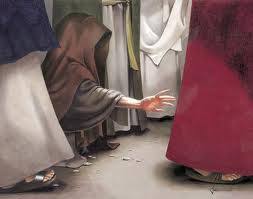 This woman said if I could but touch the helm of his garment I know I would be made whole. In Psalms 133 he declares unity is like the precious ointment that the flows from the head to the hem of the garment. When we as the body of Christ can flow together in unity, then if someone cannot get to the head which is Christ if they just touch His body that is full of unity the very helm of his garment will cause the issues of blood to stop. Somebody has to stop the bleeding. I am not saying your issue is not important I am saying when you share it please don’t do it from a position of attacking or humiliating or degrading somebody else’s view. After all these debates have been going on for thousands of years I know you think it is a new fight but just look at the history and you will see these are the same fights that have been going on for centuries.

Now I say to you: Beat your sword into a plowshare and your spear into a pruning hook and stop learning war. Learn to use the word of God as a productive tool instead of a decisive weapon. We should be gracious with our words, gracious with others, (as you may had been like what you seem to attack) loving in our disposition, firm in the position of the whole truth, for edification of the body, as we properly honor/discern the body!
I like to read your thoughts, yes the body of Christ is more important! We are the first the sheep of His pastures not our pastors, Jesus Christ is still the Head of the Church, he never appointed anyone as more important than the entire body as a Self/Special/Personal Assistant, others are simply undertaking for the Lord of the harvest, and we cherish every laborer, esteeming them of double honor. Now, to what end is the sectarian claim: “I’m of Paul or I’m of Apollos?” Whether Paul of Apollos did anyone die for us? For all things are yours the word says. We need the ministries of the Priscilla’s and Aquilla’s for our Apollos’ and we need our Paul’s to return to Jerusalem to those who were Apostles before him, submit to leadership like Paul did, and to shew them what things he had learned of the Lord! We need our Peter’s too, though an Apostle before Paul yet gracious and humble to share fellowship with him…
The investment on the body is made to adorn her as the Bride of Christ, none of us was consulted before that was done!
Hope this helps? lemme know…
(…to be continued)
Team IGNITE
Let’s connect via
Twitter.com/ignit_network
ignitenetworkng@Instagram.com
Meantime talk to me on:
Facebook.com/mosesevivie
mosesevivie.blogspot.com