Quick Question: CAN YOU MARRY ANYBODY? 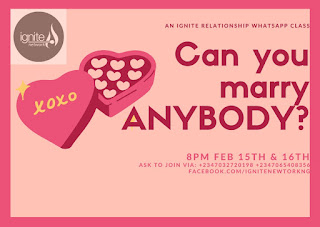 Now we had discussions a lengthy discussion with some GENTS And LADIES answering questions on ALONE or LONELY just before the Valentine’s Day. We expanded thereafter to answer questions on who to MARRY.

Here’s how we did today

We took off with Pst Timi Pudie 2030 GMT+1 By the way.. Today’s topic is CAN YOU MARRY ANYONE?

Can You Marry Anyone?

Should You Marry Anyone?

Now he asked: Why?

Several Reason.. Such as:

Just because something is technically legal doesn’t mean that it’s spiritually appropriate. MSG

It’s true that our freedom allows us to do anything, but that doesn’t mean that everything we do is good for us. TPT

Please read again and again the above verse in THE MESSAGE &amp; THE PASSION TRANSLATIONS..

Be ye not unequally yoked together with unbelievers: for what fellowship hath righteousness with unrighteousness? and what communion hath light with darkness? KJV

Don’t become partners with those who reject God. How can you make a partnership out of right and wrong? That’s not partnership; that’s war. MSG

Don’t continue to team up with unbelievers in mismatched alliances,[b] for what partnership is there between righteousness and rebellion? Who could mingle light with darkness? TPT

1. Updating your bible app does not mean the word of God will update to a new version that is now compliant with modern whims and ideologies.

2. The global push for Gender, Racial or Religious Equality, does not change God’s word in 2 Corinthians. 6:14

THREE main reasons why Christians MARRY ANYONE and end up with sad homes:

Many have jumped into marriage because they think timing is running out on them. And from experience, most of the pressure that comes with age, are directly connected to some medical or social facts that they have heard and believe.

For example, it is widely believed that conceiving after age 35 is very risky for woman and makes them prone to health complications.. But the truth is, that conversation is actually more about a healthy body than it is about conceiving at old age..

What I mean is.. A forty year old lady who is in great physical shape, has a higher chance of conceiving and delivering without complications than a 20 year old who is unfit and living an unhealthy lifestyle. Simple.

Family Pressure most times, comes from a place of genuine love and concern. But no matter how pressing it is, the final decision still lies with you.

Love or a misconception of what love is, is directly responsible for some of the craziest decisions that have been made in human history.

But is that what God calls love?

In today’s World of Globalization and Political Correctness.. Many young Christians are beginning to question the Wisdom of not marrying outside the faith..

Well, according to 2 Corinthians 6:14 (MSG Translation), marrying an unbeliever is declaring war on your future..

And I will always Say that..

The father of whoever you marry, becomes your Fatherinlaw.. And Fatherinlaws can pop in to visit at anytime..

So when you marry and unbeliever, then you’ve made the Devil your Fatherinlaw.. and he can visit at anytime with any kind of gifts..

Now lemme leave you with an amazing Letter to Jack from the amazing Uncle Leke Alder I hope you learn from his slants:

My dear Jack, look, you’re only dating this babe because she’s what’s available not what you really want. It’s like going to all those secondary school dance events in those days and all the girls are taken, except this one girl. Well, that’s the only “choice” you have so you dance with her and strike up conversation. But you soon become shackled to her when your friends begin to talk about you and her, ribbing you. And that’s how you find yourself in a “relationship” you never really wanted. Social pressure. You’re lonely. She’s available. That’s all there is to this relationship. Her sole value to you is utilitarian. Other things being equal you wouldn’t date her. You’re not attracted to her and she has traits you don’t like. But she’s lonely and you’re lonely, hence relationship.

But there’s a danger to such matches. You see, when you marry each other the alonement that motivated the marriage will evaporate. The basis of the relationship is thus gone. You’re then left to build the relationship with what is not there. It’s like trying to build a castle with air. You can only construct it with your imagination. That’s when everything begins to grate and irritate you. You can’t stand her. Little things will ignite your anger. All the inconsistencies you overwrote with the need to assuage your loneliness will now be obvious. Her nature, her pimples, her background… They’re now stark. It’s going to be a hard and sad marriage, and you’re going to drift apart. There’ll be a disconnect. You never loved her. You were brought together by that which disappeared once you came together. There’s nothing left, no glue.

Culture matters in relationship. If you’re exposed and she’s not exposed, it’s going to show up. That’s when guys begin to complain of her “background”. But backgrounds don’t suddenly appear. It’s called background. And I don’t get this thing about people saying you can marry anybody. Says who? Neither do I get people saying love doesn’t matter. Why would it not matter! Of course you might have heard that romantic love doesn’t last, so not to focus on it or give it much regard. These are strange philosophies sometimes perpetuated by well-meaning religious people. We know from the Bible at least that Jacob and Rachel kept their romantic love alive for 14 years at least, even more. And we know Jacob’s father was a romantic too. It’s recorded he was “sporting” with his wife.

I sometimes worry about some of the teachings religious folk are exposed to. Some are quite troubling. In trying to be spiritual some have become non-human. People are being taught romantic love is “carnal”, as well as physical attraction and beauty. Of course according to these teachings light in complexion women have “mammy water (mermaid) spirit”. It never occurs to someone that maybe two-thirds of all the women in the world are light in complexion. And that if this absurd syllogism is followed through then all white women have mermaid spirit! Unfortunately, it sometimes takes up to a decade for a wrong teaching to fully generate an impaired marriage. And so the totems of matrimonial mismatches erected on the edifice of false teachings take time to crumble.

Love matters in a relationship and in marriage. Attraction matters in relationship, and in marriage. If you don’t love her don’t marry her. If you’re not attracted to her leave her alone. You’re a man. You’re visual. You’re ever going to be affected by what you see. Marry whom you’re attracted to. That physical attraction mind you, is going to affect the state of sexual congress in that marriage. I don’t care how spiritual you are, as long as you’re a man you’re going to be affected by what you see! Unless of course you’re a spirit. Maybe then attraction won’t matter to you. In which case you should marry a spirit. It’s these kinds of teachings that produce confusion and apoplexy in a young man after some time in marriage. He can’t reconcile his spiritual posture with the reality of his emotional and physical needs. And that’s when he wishes he had married that other girl, the one he deemed beautiful and “spiritually dangerous.” Get out of fake spirituality. It’s very important you’re attracted to your wife.

As per relationship, each man’s emotional, cultural and physical need is peculiar. It’s why we’re attracted to different types and certain types. We can only be attracted to certain types, not everyone. And never use the wrong criteria for marriage. That she’s a faithful usher in church cannot be the basis of marriage. It’s a basis for promotion to head usher but not a criterion for marriage. Think! How can the fact that she wears rose petals on Sunday and directs people to seats be the basis of marriage! That’s not saying the faithfulness in church is of no value. It has value. It’s just that it’s a corroborative factor not the primary consideration. What is it corroborating, that IS the question. And so when the marriage breaks down because it was founded on false premises the religious begin to wonder.

There is a book called the Song of Solomon in the Bible. It’s a book you should read! Of course some people have so spiritualized the Song of Solomon even Solomon won’t recognize it. I’m saying don’t let religion mess up your brain. Christianity is supposed to enhance your capacities not degrade them. In a marriage love matters. Affection maters. Attraction matters. Physical attributes matter. So does character. It’s the combination of all these factors that make a wonderful wife potent. Get your philosophy of marriage right. If your ideology is misbegotten it will produce cataclysmic consequences. I’ll advise you go with a proven millennia old marriage philosophy than a so-called modern one hardly 50 years old.

Did you follow up? Or will you like to join our community on Whatsapp to learn and improve in Ministry and Industry from subjects on Faith, to Life and Business?

We are Team IGNITE!

Leave a comment, a contribution or a question below. Let us know if you learnt from this too…